Duration : 5 Nights / 6 Days
Places Covered : Delhi – Agra – Mathura - Haridwar – Rishikesh
This tour will take you through Delhi – the city of power from centuries, Haridwar - one of the holiest places for Hindus and gateway to God, Rishikesh - located in the foothills of the Himalayas in northern India, it is known as the Yoga capital. Finally Agra, Taj Mahal, the poem written in white marble and Mathura, the supreme worship place of Hindus 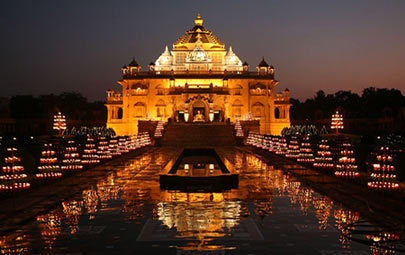 Arrive Delhi. On arrival you will be met and will proceed for sightseeing of the city. Start with Raj Ghat - the cremation site of Mahatma Gandhi, Red Fort - the old Mughal Administration centre for 200 years built by Shah Jahan, Akshardham Temple with its museum complex and enjoy the sound & light show. Proceed to hotel and check in. 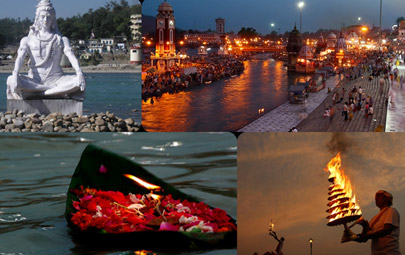 Day 04 : Delhi – Haridwar
Proceed to Haridwar (200 kms / 6 hrs). Upon arrival transfer to hotel. In the afternoon visit the nearby Mansa Devi Temple – situated on the top of the Bilwa Parwat and it is dedicated to Goddess Mansa Devi. Proceed to Chandi Devi Temple, the main statue of the temple is said to be established by the Adi Shankaracharya in 8th century. Finally visit Daksha Mahadev Temple - according to mythology, this temple is supposed to have been the site of a yagna conducted by Daksha. Evening attend Ganga Aarti at Har ki Pauri - it is also known as Brahmakund and it is believed to be the place where divine nectar fell from the pitcher. It is the site for the famous Kumbh Mela which is celebrated in 12 years. Night at the hotel.

Day 05 : Haridwar – Excursion to Rishikesh
Morning drive to Rishikesh 22 kms / 40 minutes, the gateway to Himalayas. Check in at the Hotel. Later visit Bharat Mandir- the oldest temple of Rishikesh, situated near the Jhanda Chowk. Laxman Jhula - a 450 ft long hanging bridge on the river Ganga which was built in 1939. According to myths and legends Laksman, brother of Lord Rama crossed Ganga River on a jute rope from this point. Ram Jhula - Ram Jhoola connects Swarg ashram with Shivananda Ashram. Several ashrams are located near Ram Jhoola. Ram Jhoola is bigger than Laxman Jhula and even more picturesque. Night at Haridwar Hotel.